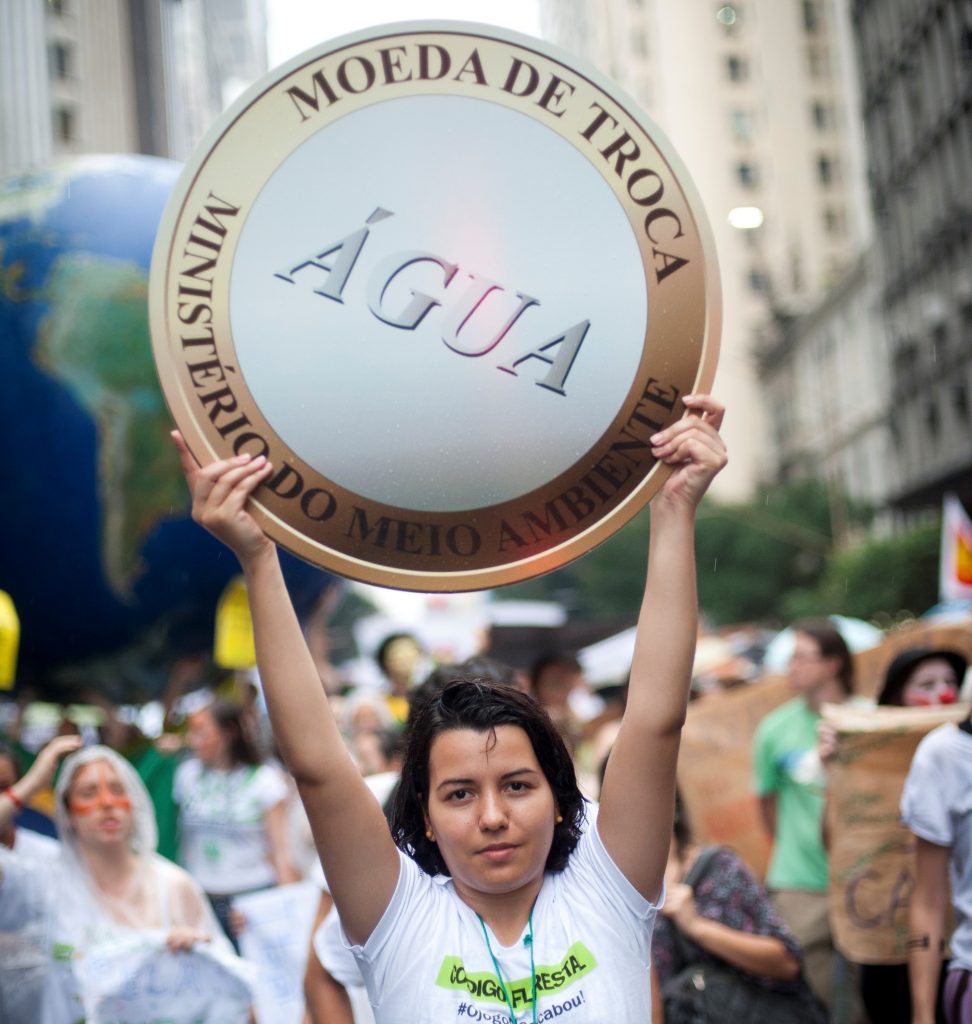 “Those with economic power continue to justify the current global system in which speculation and the pursuit of financial gain prevail, disregarding everything around it and the effects on human dignity and the environment.” Pope Francis, Laudato Si, § 56

It is estimated that US$6,200 billion per year will be needed worldwide through to 2030, two thirds of it for developing countries, for the adaptation of their production, consumption and transportation systems[1].

The total amount outstanding on derivatives[3] worldwide by market value is US$15,000 billion[4], with only 10% of it relating to the real economy[5].

Some 70% of the business of European banks – over US$33,300 billion – is devoted to trading activity, which does not serve the real economy or society[6]. Less than 30% of it serves non-financial corporations and household customers. 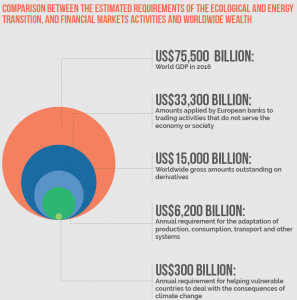 Despite its central economic role, the financial system has only limited ability to fund the energy transition

What involvement does the world of finance have in funding the energy transition?

In order to implement the Paris COP21 climate agreement, and to attain the UN 2030 Agenda Sustainable Development Goals (SDGs), many economic, financial and political initiatives have been put into action to raise and channel the necessary funding.

On the whole, however, the developed economies have opted to rely overwhelmingly on the private sector, particularly for funding these commitments. This is partly because of the need to transform the processes, activities and structure of the entities that make it up. But it is also partly because the funding cannot be raised in most developed countries to sustain ambitious public policies, due to the austerity policies in place in many of them.

So we therefore need both to radically transform the business model of companies and financial institutions, and also to completely refocus the financial markets and redirect investment towards the challenges of mitigating climate change and adapting to it.

Several policies are currently being implemented that aim to redirect funding toward the energy transition. For instance, within the next few months the European Commission is to put forward a European Sustainable Finance Strategy[7]. The recommendations made to date cover the transparency and reporting requirements for finance industry entities (incorporating sustainability into the internal decision making criteria), introducing a classification of financial assets and regulatory incentives (for example, bonuses or disincentives). Recommendations will also be made on the issue of carbon pricing. The Financial Stability Board is considering such criteria with a more global scope[8].

In France, Article 173 of the 2015 Ecology and Energy Transition Law imposes the requirement to disclose climate-related risk to investors. To date, this is the most stringent accountability requirement worldwide.

As regards business and industry, some large private institutions have started to divest out of fossil fuels[9], and many public and private entities are issuing green bonds. These include businesses, banks and financial institutions, regions and cities, as well as the Agence Française de Développement development agency. Between 2005 and 2016, almost 3,500 climate-related bonds were issued worldwide by some 800 issuers. In 2017, the total value of green bonds in issue stood at US$895 billion, although under one quarter were properly labelled “green”[10].

The finance industry is a group of entities that create and channel money – that they receive from participants in the economy (households, companies, governments, local authorities, international financial markets, and others) – and that they then direct to other participants who want that money. It is where the decisions are made on the required return and the terms of lending. Banks play a crucial role in the economy by administering payment methods and by granting loans. However, these activities that are so crucial for the economy today represent only a small part of the business of banks compared to their trading activities, which are dangerous and of little value to society and the economy. European banks devote over 70% of their balance sheets to trading activities. Under 10% of debt securities issued, under 10% of OTC derivatives and under 5% of foreign exchange transactions relate to companies in the non-financial economy. (See http://www.finance-watch.org/hot-topics/understanding-finance/920-understanding-finance-1)

What are the limitations of the current financial system as regards funding the energy transition?

Overall, existing initiatives are going in the right direction, but they are mostly tweaks to existing mechanisms rather than radical changes. Because of that, they are of limited value in funding the energy transition, and some initiatives even carry substantial risk.

1. The risk of a glass ceiling for energy transition funding

The investment required to achieve the energy transition is for the most part infrastructure investment with a long pay-back period. This is of limited appeal so long as there are high-risk speculative products on the market with very high yields over the very short term, often yielding over 10%. As long as investors have a choice between a risky but very profitable (and perhaps harmful) investment, such as a tracker fund or a derivative, and a lower yielding and longer term investment, it is hard to see how there could be a large enough increase in funding for the energy transition.

Besides, the Basel Committee international banking regulations[11], do not provide for loans to be distinguished by the carbon footprint of the project being funded. The level of capital required to cover these risks does not take this criterion into consideration. There are therefore no regulatory incentives to help redirect funding towards the energy transition[12].

2. Few guarantees on the proper use of funding

The accountability requirements on green bonds are rather lax. Where they exist at all, they are voluntary in nature, such as the Green Bonds Principles. Nothing really prevents an institution that has raise funds by this means from carrying out activities that might have little – or even no – connection with the energy transition. These financial instruments are currently of value only to those persons who believe in the need for investing in the energy transition, and to a few others who may be interested on reputational grounds.

3. The risk of speculation in green products

Once the green bond market reaches a significant size, and assuming the financial markets are still operating in the same way, investors are bound to wonder about hedging risks. And, on the financial markets today, this essential hedging is delivered via derivatives. This practice is the root of speculative malpractice and is potentially harmful because it is completely possible to purchase a derivative without having transactions to hedge. That is how speculative bubbles form.

4. Lack of diversity in the banking system

What is more, the banking system is dominated by large banks which, because of their structure and funding methods, favour large-scale energy projects. Breaking away from an energy system based on fossil fuels by its very nature involves running projects of a variety of sizes – large installation such as wind farms, but also a whole host of renewable energies projects on a local and/or regional scale. The challenges of the energy transition call for a very wide range of bank and financing options that would also include local banks, and mutual and cooperative entities.

Governments, particularly in developed countries, are deeply indebted to the financial markets[13], and the financial markets favour austerity policies. This prevents governments committing large-scale investment to the energy transition and conducting ambitious policies and/or offering incentives because bringing the finance industry on board leaves them little room for manoeuver.

This internalization of austerity by political leaders is also largely due to the fact that public sector officials, politicians, bankers and major corporate bosses share a common culture. They have the same initial education and training, and very similar career paths. In France, 34% of the “Inspecteurs des Finances”, the financial regulators, have worked for or are working for the banking industry, and almost half of them will end up back in the public sector. Bank regulation bodies also have a number of former bankers[14] on their staff. Thus governments, particularly those of developed countries, are not in a position, or do not have the will, to bring in the strict regulation needed to radically restructure the financial system and make it serve society and the common good, of which the change to cleaner energy and safeguarding the environment are examples.

How to boost funding for the energy transition

Three measures could be taken now to ensure the success of the existing initiatives:

To break with the short-termist bias of current finance and to promote investment that is for the public good, such as the energy transition the following measures are required:

[3] Derivatives can be used to hedge against risks on financial transactions involving particular assets, but there is no requirement to own the hedged asset and there can be several derivatives over the same asset.

[4] Gross value measures the size of the sums invested in the derivatives market. The notional value of derivatives (that is to say the total value all contracts) stands at the astronomic sum of 483,000 billion dollars, which gives an idea of the sums that would be at stake on this market in the event of a crisis.

[7] On the institutional front, this is considered to form part of the wide-ranging Capital Markets Union plan, which was launched by Juncker Commission in 2015 to develop non-bank finance for the economy. See https://ec.europa.eu/info/business-economy-euro/banking-and-finance/sustainable-finance_en

[9] « Since 2015 and COP21, 745 institutions worldwide, managing $5,500 billion in assets, have decided to divest out of fossil energies » http://www.novethic.fr/isr-et-rse/actualite-de-lisr/isr-rse/les-institutions-catholiques-desinvestissent-massivement-les-energies-fossiles-144867.html

[10] The Climate Bonds Initiative distinguishes bonds that are « labelled » as green (assessed as meeting the criteria) and « aligned » bonds, which have climate-related objectives and which are not labelled, see http://www.climatebonds.net/files/files/CBI-SotM_2017-Bonds%26ClimateChange.pdf

[11] As regards financial stability, the Basel Committee rules require the banks to maintain a certain level of capital to back their lending commitments. Their commitments are weighted mainly according to the risk of non-repayment. These weightings are calculated by banks themselves, which might cause to them underestimate the most risky commitments. Because these weightings are done by the banks in-house, it is hard for the regulators to keep a close eye on the risks taken and then make comparisons. This makes it difficult to oversee the systemic risk inherent in an interconnected banking system.